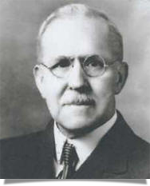 Charles A. Berkey is credited with the founding of this great organization. At his suggestion, the name “Exchange” was selected because the group wanted to exchange ideas and information with like-minded individuals about how to better serve their communities. The first local Exchange Club was formed in Detroit, Michigan in 1911. The second was the Exchange Club of Toledo, Ohio, formed in 1913. Subsequently, two others were organized in Grand Rapids, Michigan, and Cleveland, Ohio. These four clubs were the first to be chartered by the National Exchange Club after it was organized as a nonprofit, educational organization in 1917. Exchange sponsors activities designed to benefit, award and develop our nation’s youth, promote crime prevention, serve senior citizens and recognize military and public safety service providers. Exchange also promotes Americanism programs, and its national project is the prevention of child abuse.

In addition to these programs, The National Exchange Club has been at the forefront of significant developments in American history, including the early days of aviation progress. The spirit of patriotism, along with a desire to heighten awareness of our rich religious heritage, placed Exchange in a position of leadership with other organizations that led to the addition of the words “Under God” to the Pledge of Allegiance in 1954. 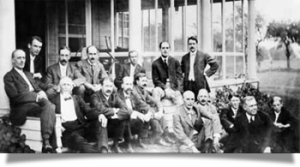 Charles Berkey (standing, back row, far right) and members of the Boosters’ Club, Detroit, Mich., in the late 1800s. Many from this group became members of the first Exchange Club.

Our National Project The National Exchange Club’s national project, the Prevention of Child Abuse, was adopted in 1979 with the encouragement of National President Dr. Edward North, Jr., a physician from Jackson, Mississippi, who observed increased incidences of abuse through his medical practice. Women in Exchange On July 4, 1985, at Exchange’s 67th Annual Convention in Philadelphia, Penn., the national constitution was amended, thus opening membership for the first time to women. From a handful of members in Detroit, Michigan, at the turn of the 20th century, Exchange has developed into a progressive national service organization comprised of tens of thousands of dedicated men and women serving their local communities and advancing their motto of “Unity in Service.”

We are America’s Service Club. From our organization’s earliest days, Exchange Clubs have been unselfishly serving their communities and improving the quality of life. The diverse array of Exchange-sponsored programs and projects has made a considerable impact on America, enhancing the lives of countless men, women and children across the nation. The National Exchange Club headquarters is located in Toledo, Ohio. Our chief objective is to help Exchange Clubs realize their full potential of community service.

Our Motto - Unity for Service
The motto was adopted in 1917.
Its originator, Charles Berkey,
said the motto was inspired
by the 133rd Psalm, which says
“Behold how good and pleasant
it is for brethren to dwell
together in unity.”